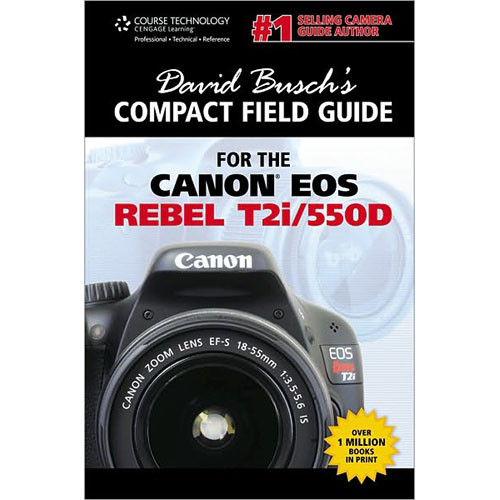 David Busch's David Busch's Compact Field Guide for the Canon T2i (550D) is small, spiral bound reference guide to this camera that fits in your gear bag. No more trying to read the small print in the original instructional manual. This guide is a quick reference way to obtain valuable data on the camera. It's small enough to be kept in your gear bag or on the table in your studio. The pages lie flat when opened which means you can concentrate on the buttons on the camera rather than the book.

In addition to finding information about what all the buttons and dials do, you'll be educated in when, where and how to use them. There are valuable tables that give you suggested settings for various shooting scenarios - landscape, portrait, sports and more.

About the Author: With more than a million books in print, David D. Busch is the world's #1 selling digital camera guide author, and the originator of popular digital photography series like David Busch's Pro Secrets and David Busch's Quick Snap Guides. He has written nearly two-dozen hugely successful guidebooks for a wide variety of digital camera models, as well as many popular books devoted to dSLRs, including Mastering Digital SLR Photography, Second Edition and Digital SLR Pro Secrets.

As a roving photojournalist for more than 20 years, he illustrated his books, magazine articles, and newspaper reports with award-winning images. He's operated his own commercial studio, suffocated in formal dress while shooting weddings-for-hire, and shot sports for a daily newspaper and upstate New York college. His photos and articles have been published in Popular Photography & Imaging, Rangefinder, The Professional Photographer, and hundreds of other publications. He's also reviewed dozens of digital cameras for CNet and Computer Shopper. His advice has been featured on National Public Radio's All Tech Considered.