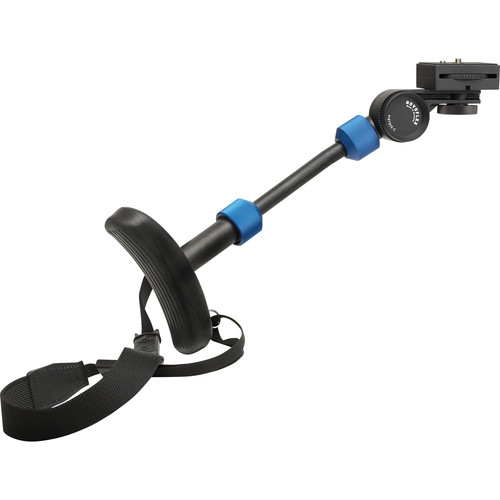 Novoflex's Chestpod is a great way to lend support when shooting with long lenses in scenarios where monopods and tripods would be impractical or prohibited.  It begins as a comfortable neckstrap, which articulates to a wide rubberized base that rests on your chest, usually just below your sternum.  Attached to this base is an arm that ends with a swiveling plate which has a 1/4"-20 screw for attaching the tripod collar of the lens.  Of course, with medium "fast" telephoto lenses such as an 85mm f/1.2 or f/1.4, 135mm f/2.0 or the like, you would attach the front of the Chestpod to the bottom of the camera.

In this way, the shooter achieves a stable triangle of vibration-reducing assistance for those longer teles.  Great for capturing sharp shots of scenes (such as popular tourist destinations) whose controllers have implemented anti-tripod rules in an attempt to sell their pictures.

The Chestpod can be used upon its own, or in conjunction with a quick release adapter to speed up the attachment and detachment of the Chestpod and whatever you're attaching to it.

The lenth of arms is not long enough, some parts are made from chip plastic. Arm is not long enough. The price is just ridiculous for this quality. Many years ago I bought for about $10 Sima (maybe Simq) neck pod. It is still alive (see images) I was hoping to get something better than my old pod, but unfortunately it is worse and much more expensive

Not what I expected.

After purchasing the Nikon 200-500mm zoom lens, I decided I needed a chest pod of some type to be used in close quarters or in areas where tripods were not permitted; having owned other Novoflex products and being impressed with their engineering and precision of their system, I went for their chest pod. To my disappointment, the unit did not feel of behaved like their other products. The use of plastic parts instead of their usual machined components made the whole system feel unstable and insecure. The Nikon 200-500mm lens turned out to be more than it could handle making it cumbersome to use. Some improvement with the handling was observed with shorter focal length lenses like the 70-200 f/2.8 zoom, but that was not what I was looking for. The chest pod was returned to B&H for credit three days later.

Once you figure how it works, it is very good

This chestpod has made photographing arthropods so much easier for me! Usually, nature won't lend you a hand and give you the perfect platform for propping ones self up for a photo shoot at any given time. This chest pod can be propped against pretty much anything, and it is incredibly lightweight and portable. My only guff with is is the base on which the camera is screwed on, but that's no issue that an additional ball-head cannot fix. Excellent work Novoflex, and thanks to BH Photo for providing (I seriously could not find this chest pod anywhere else)!

Great product like most from Novoflex Use with D800 and pro primes... could be good for the DSLR / M4/3 video shooter also.

For the price, it was less than I expected. The neck strap is very short and this unit will not work with a lot of gear on for cold weather shooting. The strap is just not long enough. I am keeping this product, but purchased a longer, adjustable strap separately. I do not think it is worth the money, but great idea.

This was well worth it.

weight limiT?
Asked by: Wyoming Military
It has no problem with my Nikon D5 and a 200 - 500mm lens.
Answered by: Anonymous

Will this work with. Tamron 150-600mm mounted on a Nikon D7200? I shoot BIF and wildlife.
Asked by: Karen
The usefulness of this device comes down to personal preference. In the movie business we called it doing whatever it takes to get the shot! From what I see of birders and my own shooting of wildlife, I would recommend you first try using the Tamron lens hand-held, particularly for BIF. If you find yourself tiring or you need to keep the lens to your eye for long periods (on a nest for example) then give this a try and it may be the answer for you.
Answered by: Dennis A L.

I have a Nikon D300S and intend to use a portrait lens with the Novoplex Chrstpod. What else do I need to enable quick transition from landscape tp portrait positions. What compatible L-bracket, quick release, or other accessory should I use in conjunction w/ this equipment?
Asked by: Kathryn G.
You can get the bracket and base shown in the Chestpod photos. Novoflex Q=Mount Arca-Type Manual-Locking Quick Release Adapter - Requires Plate B&amp;H # NOQM and the Novoflex QPL-Vertikal L-Shaped Quick Release Plate for Q=Base System B&amp;H # NOQPLV.
Answered by: Dennis A L.

Will it hold a big telephoto lens ? One of the photos seem to show a user with a Nikon 200-400mm. I want to use it with a Nikon 300mm f/2.8 If it's not sturdy enough, any other suggestions ? This will not be for video.
Asked by: Anonymous
It is a tool and it's success depends on how you use it. If you do not wish to use tripods or monopods, then try and see if it works for you. The main technique you would have to master is taking in a deep breath, letting out half of it, and then holding still while you shoot. Otherwise, your breathing will be an issue with such a lens. Other techniques is keep your shutter above 300th of a second and use higher ISO for hand-holding your camera.
Answered by: Dennis A L.

Is the damping (resistance) for tilt and/or swivel adjustable or locked?
Asked by: Herbert
completely adjustable.
Answered by: Jon H.

Does the bottom of the 1/4 20 locking wheel have a female 1/4 20 socket?
Asked by: Colin
Yes it does. It has the standard removable plate with a male screw. Once that is removed, the remaining base plate has a 1/4 inch hole.
Answered by: Geraldine G.

Can you do a 30 seconds exposure using this?
Asked by: Matt A.
I use my PISTOCK-C to support binoculars. Based on that, I very much doubt anyone could hold still enough over 30 seconds to get a non-blurry picture.
Answered by: Matthew B.

How easy is it to go from a landscape position to a portrait position? Otherwise Can a ball head be attached to this to accomplish that?
Asked by: Jacob
Quite easy. My Nikon long lenses and most others allow the lens to stay fixed to the chest/shoulder pod support and with the release knob on the side of the lens the camera rotates 90 degrees back and forth to both positions. No ball head is needed.
Answered by: DONALD E.