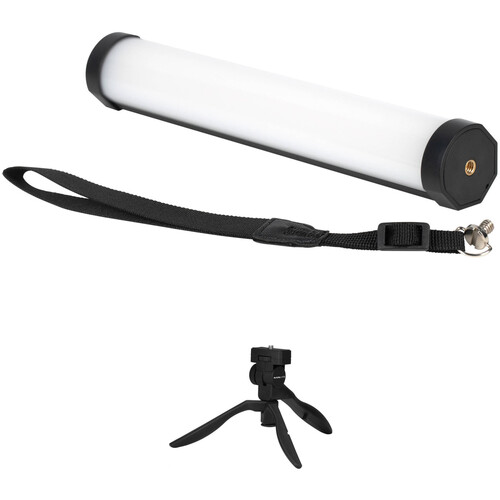 Flexibility is key to the Nanlite PavoTube II 6C 10" RGBWW LED Tube with Battery's design. The light has color temperature variable from 2700 to 7500K to blend in seamlessly with ambient light conditions, match other fixtures, or express creative effects. It also has an RGB mode that enables its red, green, and blue LEDs to select from 360 colors with hue control that produces a myriad of color combinations. Light intensity is variable as well, from 0 to 100%. The PavoTube II has a built-in rechargeable battery that will give you 65 minutes of runtime on a full charge at 100% power. It also has special effects including Hue Loop, CCT Loop, Int Loop, CCT Flash, Hue Flash, CCT Pulse, Hue Pulse, Storm, Police Car, TV, Paparazzi, Fire, Disco, Bad Bulb, Fireworks, Explosion, and Welding. The light is ready for worldwide use, charges via the included USB cable, and comes with a set of metal mounting plates. A padded carrying bag is also included.

With an adjustable color temperature from 2700-7500K and green to magenta adjustment, plus a CRI of 95 and a TLCI of 97, the PavoTube II 6C packs studio-quality lighting into a travel-friendly package.

Powered by an internal lithium-ion battery, the PavoTube II 6C runs for 65 minutes at full brightness and can be charged by any USB Type-C source, including power banks for added runtime.

Small enough to fit in any gear bag, the PavoTube II 6C is compatible with most T12 diameter accessories and features two 1/4"-20 receivers as well as powerful magnets for mounting nearly anywhere.

Easily achieve impressive results without adding plastic filters or gels. The PavoTube II 6C's easy-to-use dials and buttons let you dial temperature from warm to cold (2700 to 7500K) or adjust hue and saturation in RGB mode.

The Mini Tripod and Handle for PavoTube II 6 C from NanLite is a low-profile support with a 1/4"-20 mounting screw designed to support the 10" LED fixture.

Do these have DMX or CRMX?

Can product be used while connected to USB power ...

Can product be used while connected to USB power source to extend use time?
Asked by: Sheila
Yes. All functions will remain available.
Answered by: waynes

Does this have app control or do you need to buy ...

Does this have app control or do you need to buy a special wireless hub for 300
Asked by: Eric
The PavoTube II 6C has built-in Bluetooth and it will be possible to control it without an additional hub device using the free Nanlink mobile app for iOS and Android when the app is updated in summer 2021. Until then, you can control the PavoTube II 6C using the Nanlink mobile app with the separately available Nanlite CN-W2, which now costs $150, not $300. You can also fully control the Forza and MixPanel lights and the larger PavoTube 15C and 30C with this equipment.
Answered by: Sam

What's the difference between this PavoTube 6C ...

Compared to Nanlite LitoLite 5C pocket light, which one is better to create SOFT fill light or even key light for travel portrait photography when big gears are not possible?
Asked by: Zhenyu
Between the two the PavoTube 6C 10&quot; RGBWW LED Tube with Battery would be better for a soft fill light or an even key light.
Answered by: Kirk

Has anyone flown with these lights? Will the TSA ...

Has anyone flown with these lights? Will the TSA or airlines have and issue if you have 4 of them in your carry on case?
Asked by: Chris
The following item is TSA compliant and safe to travel with. Highly suggest splitting the count and checking in two and carry on the others.
Answered by: hectorm

Are there 1/4&quot; screw holes on both ends or just one end? Hard to tell from the photos.
Asked by: CUONG
Yes, there are threaded ends on both. I would still use the alternate tube clamp though, since there are molded into plastic.
Answered by: Charles

When will accessories like the barn-doors and egg-crate be available?
Asked by: Rick
No ETA at this time
Answered by: Shalom
Close
Close
Close