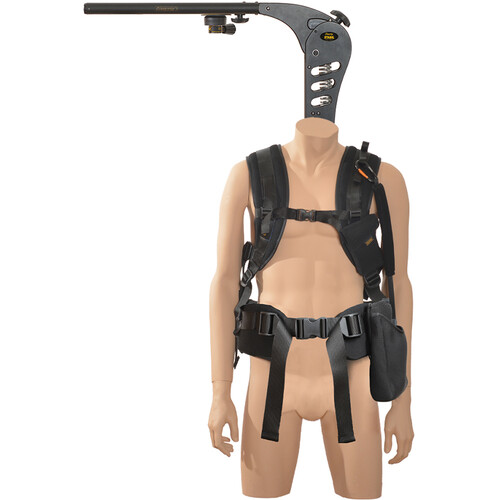 Key Features
The Vario 5 with STABIL G2, Standard Gimbal Rig Vest & Quick Release from Easyrig features the Vario 5 power pack, STABIL G2 foldable shock-absorbing arm, and standard-size Gimbal Rig Vest, which is designed with a wide front that fits around the waist and over the hips. The standard vest offers a waist adjustment range of 33 to 47". Also included is a quick release camera mount instead of the standard one.
More Details
In Stock
Share
Print
No Store Display
$6,740.00
$562/mo. suggested payments for 12 Mos.
with the credit card.§
or Save the Tax with the

The Vario 5 with STABIL G2, Standard Gimbal Rig Vest & Quick Release from Easyrig features the Vario 5 power pack, STABIL G2 foldable shock-absorbing arm, and standard-size Gimbal Rig Vest, which is designed with a wide front that fits around the waist and over the hips. The standard vest offers a waist adjustment range of 33 to 47". Also included is a quick release camera mount instead of the standard one.

The Vario 5 has an integrated 35" suspension line and offers tension adjustment on the rear for 11 to 38 lb loads. The STABIL G2 Arm is included in place of a standard arm. It's designed to hold your camera load while also smoothing out shots. It also has a built-in stand hanger that allows you to set down your entire rig on the edge of a film cart or other surface with a similar edge.

The body-worn Easyrig system takes the load off your shoulder, neck, and arm muscles and distributes it across your torso for easier operation over long periods.

I don't know how I ever left home without it. My new favorite piece of gear.

My back says Thank You

Good Lord I waited too long to buy this. It's a hefty purchase (for me), but I've been spending too much money renting this same Easyrig since this particular nonsense came out. The first week I had it I was strapped to an Arri Amira and some cinema zoom lenses that would've otherwise not been possible for me to operate handheld for as long as we were shooting. Had zero issues adjusting back to my much lighter RED DSMC2 and prime lens package. I went with the Vario 5 because I knew I'd be using this Easyrig with multiple camera packages and weights. The 5 Extended Arm option was great for me because it allows me to reposition for different camera builds, center of gravities, and easily switch between shooting a balanced shoulder mount or from the hip. I chose the Cinema 3 Vest over the Gimbalrig because I like the smaller profile and it fits me better. I'm about 5'8, 160lbs, and I'm a 30-31 waist size.

Wish I had purchased 10 years ago

Have used now on four shoots, two all-day hand held, two Movi. At 45, I have back pain on almost any shoot where I have to go handheld for over 15 minutes with my large camera package. I had tried other rigs for the Movi, but never fully evading the 'end of the day discomfort' that was sure to show up. This package changed all of that. Of all the gear I've bought over the years, this has to be my best purchase. The impact was immediate... walked away from two 14 hour days with zero pain or stiffness. Next shoot, Stabil arm worked so well with my Movi walk-and-talk, again.. no back pain. The quality and build of this rig is top notch. Nothing overlooked, no expense spared with build quality. And to top it off... takes seconds to 'rig up' with the help of the easy lock waist belt. If I was hot, I'd easily take it off between setups. I could rig-up as late as talent walking to set which is something I could never do before with the movi and other setups. Bottom line, this rig is an investment in your future as a DP if you suffer from any kind of back pain. Wish I had purchased 10 years ago.

Best version of the EasyRig

Unless you're doing gimbal work, this is the best EasyRig for most setups. The Vario gives the user the ability to adjust tension for a wide range of camera sizes and weights. The gimbal vest is great for waist support, much preferred over the original vest in my opinion. The 5 arm is the perfect size to get the camera off your shoulder but not be obtrusive in your environment. Only wish I bought this sooner.

Unless you're renting in LA or NYC, it's nearly impossible to find a Vario 5 with a small operator vest. I'm 5'6, medium build (34 waist), and still need to tightly strap up on this rig. That tells me it'll fit someone taller and bigger than me. This rig is perfect for larger/heavier camera rigs and a Movi Pro. Fitted correctly, you don't feel any of the weight and I can see it working well with female operators as well. One thing Easyrig doesn't really make clear and immensely valuable to me is: The rig can quickly be raised and lowered about 5-6 inches. That might not seem like a lot but I'm short at 5'6 and the increased arm height allows me to raise the camera/Movi to film taller people without having to shoot up at them. It's just 4 screws that can be quickly adjusted within 2 minutes. Finding a proper hard case to fly with this rig is not easy/cheap. BUT the vest can be easily separated from the arm in order to make the entire rig smaller and portable. Just takes adjusting the same 4 screws. Also helpful if you want to throw on a standard/larger vest for other operators. The Serene Arm is amazing. Paired with a Movi/Ronin, proper handling, and rolling your steps, you can get some amazingly smooth footage. Remember to adjust the tension of your Serene Arm so it's parallel to the ground. Also remember to loosen the Serene Arm while traveling so you can safely bend it and make your rig smaller for packing.

This is great for a cinema style camera build. I fly a Arri Amira with zoom lenses, FIZ and teradek, so something in the 25lb range. This system allows for me to go hand held all day with minimal effort. I'm a large guy, 220lbs and 6' tall, and the cinema 3 vest fits me just fine with plenty of room for larger guys. These things are built like tanks, you can zip tie the bag shut and check it on airlines no problem. Easyrigs are basically career extenders that save your back.

Waited years to get one. Should have done it sooner

After years of renting Easy Rigs, dealing w/ the uneasy feeling knowing that other people probably sweat in them as much as I do and not knowing how good the rental houses clean these things, I finally got around to investing in one of these. Perfect for low mode where it can hold the camera weight chest height or lower, or static shoulder shots to give the shoulder a break. I've used this countless times over the years and finally got one. Should have done it sooner. Now I gotta save up for the Stabil arm

Does the updated Stabil G2 + M Gimbal Rig have ...

Does the updated Stabil G2 + M Gimbal Rig have the new Easylock and Ace bag?
Asked by: Huay-Bing
The Easylock now comes standard on all Gimbal Rig and Gimbal Flex Vests. Similarly, the Ace bag is now standard for vests featuring the Easylock ratchet buckle.
Answered by: 16x9 Inc - Distributor

Are you able to adjust the extended arm? I'm 5'7 and with the Minimax, I find myself to short for taller talent. But how comfortable is the extended arm in most cases?
Asked by: Daymian
The extended arm has a 4 inch / 20mm adjustment. The manual on the product page contains detaled instructions on all adjustmens. Click on the overview and read the manual on right side of the page.
Answered by: Gary

Is there a carrying case for this product?
Asked by: Anonymous
All Easy Rig products come with a transporter bag. Once it is in stock, we will list it In the Box.
Answered by: Dennis A L.

Hi, I'm a Movi-Pro operator and looking for a rig to use it with, and separately for just the camera sometimes too. My question is, which is better, 5&quot; arm extension or 9&quot; arm extension? I've used an EasyRig 2, I believe, with no arm extention and it was a waste of time and energy having to hold it far out front.
Asked by: Jason
5 inches and 9 inches are not that far apart and depending on your setup, physical size and arm reach there is some overlap where either option may work for you. So to help you decide I'd look at the options like this: If you felt that the Easyrig with the standard arm was &quot;too close&quot; but &quot;usable&quot; then the 5&quot; model will probably work for you If you felt that the standard arm was &quot;way too close&quot; and &quot;completely unusable&quot; then the 9&quot; model is probably best.
Answered by: jabarih

For Gimbal work, MoviPro, is a 5&quot; extended arm or the 9&quot; extended arm better? Currently shooting with a Canon C500 and want to be able to use both the Movi and without the Movi. Earlier this year I rented a friend's EasyRig 2.5 and had to push the Movi far out in front of my body, which made the EasyRig basically useless, the weight was in front of the arm.
Asked by: Jason
For gimbal work, 9&quot; arm extensions or 5&quot; arm extensions with Flowcine Serene stabilizer would be optimal for distance from body. If you need to do double duty, then the 5&quot; arm may be able to work for your needs without being at the extreme ends of the standard arm or 9&quot;.
Answered by: Richard

what size bag comes with the Easyrig Vario 5 with ...

is the carry bag the STANDARD, PLUS, KING, QUEEN, ect. size?
Asked by: gordon
The Easyrig Vario 5 with Gimbal Rig Vest and 5&quot; Extended arm comes in the Plus Bag.
Answered by: Joseph