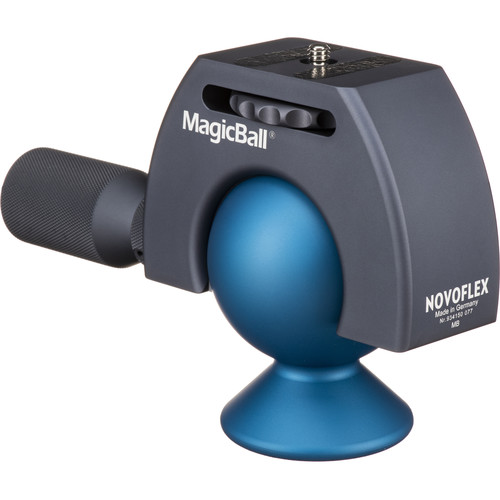 A marvel of innovation. You have instant access to 85% of a sphere, making this far and away the quickest to position ballhead. There is no vertical notch necessary. The surface is coated with a scratch-resistant, smooth shell which reduces vibration transmission while allowing the user to move the gear with ease and expedience. There is no independent panning capacity, however this can be solved by using the Novoflex Universal Panorama Plate. Together these two pieces provide quicker use than all other ballheads. This will hold the biggest of medium format equipment as well as supertelephoto lenses.

Unlike most ball heads, this guy stays exactly where you put him. Easy to adjust and doesn't move bit. Well worth the price.

The head can handle 28-300 on Mark III 1Ds is fine. Shoot vertical I will turn the lens not from the head. For 18-200 on D2x shoot in vertical hold well no problem. After 4 years of use the head still alive(3 photo shoots/week). Own three Magic Balls on three tripods, I can't find any ball head can perform greater then this Magic Ball(Blue Ball). Take few weeks to get used to it then you will LOVE IT!

Difficult to work with

What the other guy says

...and more. If you're even thinking about getting one of these - don't waste any more time. Just do it. Highly functional, rock solid, beautiful.

The only ballhead pass 90 limited.

I am a commercial photographer, shooting with a tripod all the time, this ballhead is not yet let me down after 300 outdoor and indoor assignments in two and half years. REALLY WORTH THAT MUCH MONEY.

I have a couple of great ball heads, but wanted something that was sturdy and easy to quickly adjust, especially when I'm out in negative F temps. Am very pleased with the high quality and workmanship.

Not quite as good as the specs suggest

First off, the positives: this thing is built like a tank, the range of motion is unequalled, and it looks really cool (like most Novoflex products). So the big selling point is the range of motion. That's great, but do you need it? If you're shooting wildlife or sports with exotic telephotos, you're probably better off using a gimbal head. Macros? A traditional ball head's drop slots should be enough. Landscapes, portraits? Probably not at all. In other words, for a lot of people, that extra range of motion won't even come into play. Taking a look at the design, you can think of it as an upside-down ballhead - the cup is on top, the ball and stem on bottom. The cup is the part that moves, while the ball is stationary. The cup basically has two drop slots 180 degrees apart (I know they're much wider, but bear with me here). That can also be bad news, because your camera's orientation remains in a fixed alignment with the drop slots, which would normally be aligned to allow for up/down panning. If you want to go into portrait orientation, you would have to re-orient the camera 90 degrees first. You can do that with the addition of a pano plate, but it still isn't as fast as it would be when using a traditional ball head. The other option, of course, is to use an L-bracket (yes, you should use L-brackets with any head; but with other heads, you can get by without. With the MagicBall, it is a necessity). However, this shows a potential limitation that is often overlooked when one thinks about the MagicBall's range of motion. The mini version of the MagicBall does not have friction control. Not a huge deal, but it does make it a little more difficult to make minute adjustments. The maximum load of the MagicBall should be enough for most people, but when compared to other large ballheads, the size (or weight)-to-load ratio is not so good. That means there can be a loss in absolute stability, depending on the load. And finally, the absolute worst thing about the MagicBall: the bottlecap attachment screw on top. It is difficult to get anything attached to it never to move. If for some reason you plan to attach a camera directly to the MagicBall (don't do it - budget/save for a quick-release clamp and L-bracket), the camera WILL slowly drop due to gravity when put in portrait orientation. Same with the Novoflex pano plate (with a camera attached, that is). The quick-release clamps (Q=MOUNT, for example) fare somewehat better, since they have a locking screw to dig into the MagicBall's dinky little rubber pads, but even that does not work perfectly. You must be careful how you use that range of motion, because the top screw is too unstable. Using Loctite or SuperGlue or whatever to freeze the screw isn't a good idea if you ever need to switch what is attached to the MagicBall. IMHO, most people are better off getting a traditional ball head, preferably one with a threaded hole or at least an immobile top screw, giving up some range of motion for simplicity and speed of orienting the camera, and especially for stability (seriously, that bottlecap thing is a surprisingly poor design coming from a company like Novoflex). That said, the MagicBall is not terrible, but now that I've used one for a while, I wish I had gotten something else.