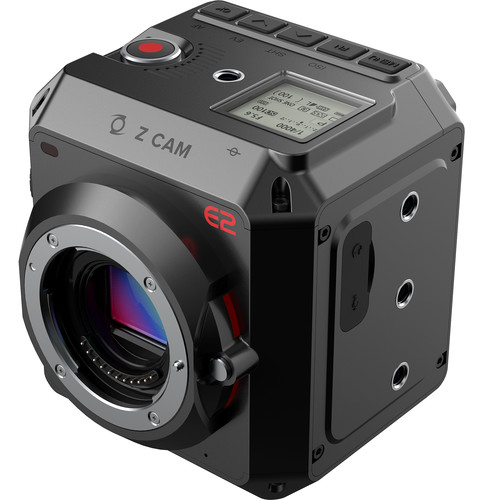 The Z CAM E2 Professional 4K Cinema Camera shoots DCI and UHD 4K at up to 160 fps, as well as HD up to 240 fps, and records to a CFast 2.0 card (not included). An optional cable enables syncing two E2 cameras together, and the system supports syncing up to 100 cameras. The camera features a 4/3" sensor with 10-bit color support and nominal 13 stops of dynamic range with 16 stops when set to WDR. The camera supports recording in ProRes 422 in 10-bit, as well as H.265 and H.264 codecs for efficient compressing of your image.

An included Gigabit connector provides data transfer and control of the camera, and you can also use an available iOS app to control the camera and to view a live image preview. You can also control it locally by the buttons along the front edge of the camera. The camera powers from an L-series battery (not included) or via the included AC adapter.

Firmware 0.98 Update
4K Capture and Recording
Interfaces and Expandability
iOS App
Z Camera is a mobile application for camera live preview and control through Wi-Fi/USB cable connection. It allows you to start/stop recording and adjust the camera settings remotely, and also has advanced features on the camera live preview. It can be downloaded from the Apple App Store.
Camera Body
UPC: 841687100061

I'm going into my third week with it. It has its quirks, but all-in-all, I'm happy with it. It is versatile, it is modular, and it is a great camera.

nice video camera/recorder but has problems

I have been experimenting with just my one unit received from B&H Photo a few weeks back. The picture is nice and edits in well with that of the Panasonic GH5s. Unfortuantely, autofocus cannot be depended upon in the continuous focus mode. Push-to-focus seems to work well to offer a single automatic focus though. Audio mode is OK with in-camera, 3.5mm, and xlr input possibilities. I noticed some background noise in the auto-level mode. Noise seems to trigger 'on' when record button is pressed. Maybe just a bad unit. Am sending it back for replacement. I will plan to update this review in about two weeks' time.

Tiny beast of a camera

Great form factor and versatility, excellent battery life, robust recording options, unbeatable price. Slap on a Metabones speedbooster and this thing can get close to a full-frame look. If you use a fairly recent iPhone or iPad, it works flawlessly as a monitor with a usb-c to lightning cable.

Allot to like. Low cost 4k, records to usbc, built in wifi hot spot for remote control, variety of recording modes and formats, and an active support forum frequented by the owner of the company. Documented my build here: https://www.facebook.com/media/set/?set=a.2599705156954449&type=3

Love the soft image of this camera. My first cinema camera and I am loving it.

Perfect camera, amazing features, wonderful app, gives me videos that I could have only dreamed of before.

A camera with a lot of problems

Usually I don't like to write something bad, but in this case I'm quiet frustrated with all the issues I have and the poor customer service, which basically tell me that's ok having problems. Here the facts: 1). The Angelbird CF card most of the time cannot be read. Btw it's very difficult to take it out, I'm using a spoon to avoid breaking a nail. I don't know yet if the problem is just with the card. 2). The mini XLR connection which gives phantom power, is producing a very loud noise for most microphones which makes impossible to use that audio at all. The solution is to buy a mike with battery (not much choice on the market). They should do a test and specifically mention a list of mikes which works (if any... I have my doubts). Btw I had a Kondor Blue cable which didn't work (I saw here in B&H also somebody else with the same problem). I had to order an Alvin cable by Amazon. 3). The wireless connection is poor also at a couple of meters distance, maybe due to interference with the wireless Rode Go mike I'm using which through the 3.5mm jack connection is crystal clear. 4). Colour science: in ProRes 422 there is not much too play with and I can't test ZRaw or ProRes Raw with my old Mac Pro. Honestly with the Kinefinity MAVO also in ProRes 422 you get really a cinematic look easily. I bought the Z-Cam for the autofocus for solo working on a light gimbal. 5). Autofocus: you need a good contrast, otherwise forget it. 6). I shoot 2.8f, 180 shutter, 600 ASA in a very no contrast room and the image noise was terrible: impossible to use this footage. You can avoid this problem by recording in low noise which is not available in WDR. OK, it's also true that if you don't have contrast, you don't need WDR.

This is NOT a fanboy review. This camera gets all the attention it needs on its Facebook page. What I will say is that, for the price, this is an incredibly competent production tool. Is it perfect? No. The menus are overly complicated, and the ergonomic placement of some of the buttons are counterintuitive. But all of these are solvable issues. The form factor and low light sensitivity are what drew me to this camera. The post workflow is another matter..and something a new buyer needs to consider. The images the camera makes have a remarkable degree of latitude in post. Ultimately, probably the single greatest feature of this camera isn’t even the camera—it’s the responsiveness of the company to user input. They really listen to their customers, and try to incorporate as many suggestions from real-world users as possible. All you big box camera companies? Pay attention to what Z Cam is doing. They certainly have my attention.

What is the maximum clip length that this camera ...

What is the maximum clip length that this camera can record before generating another clip during continuous recording? Thanks
Asked by: peter
This camera will be able to record a clip for as long as the memory card and codec chosen allows. There is no recording time limit.
Answered by: Joseph

Anyone that can tell something about the low ...

Anyone that can tell something about the low light capability of the e2?
Asked by: Dalcin
The Z CAM E2 Professional 4K Cinematic Camera uses a 4/3&quot; WDR CMOS Sensor, so while it is not as large as Super35mm or Full-Frame sensors, it will yield good low-light results for its price range.
Answered by: Michael A

What is the start-up time?

What is the start-up time?
Asked by: NICHOLAS
The Z CAM E2 Professional 4K Cinema Camera takes several seconds to start up.
Answered by: Nicholas

does it record audio when shooting slow motion? I ...

I have Panasonic lumix micro 4/3 lenses for my ...

What is the largest Cfast 2 card capacity that ...

What is the largest Cfast 2 card capacity that the E2 will accept? 512Gb? 1Tb?
Asked by: Steve
I use an EgoDisk 512GB - no issues. I'm sure it'd be ok with 1TB, but those are not only crazy expensive, they're rather rare - compatibility is very much about card speed, so you wanna stick with card brands that can really handle the bit rate. Be sure and jump on Zcam's FB page - incredibly helpful group there.
Answered by: Charles

Can you use a motorized zoom lens and have it ...

Can you use a motorized zoom lens and have it controlled through the lanc? If so which one would be best? at least 12 to 1 optical is needed
Asked by: Scott
We are sorry to say that we are not aware of any zoom lens that can be controlled through a LANC with the camera that is 12x.
Answered by: Joseph

I have a question about the software. Can you ...

I have a question about the software. Can you program it to record for a specific amount of time, and then auto download the file over ethernet to the PC? Looking to record specific 2-3 second clips with a fast transfer back (1080p 240fps)
Asked by: Zachary
Your best bet is to join the ZCam E2 Facebook group. Tons of knowledge there.
Answered by: Russell