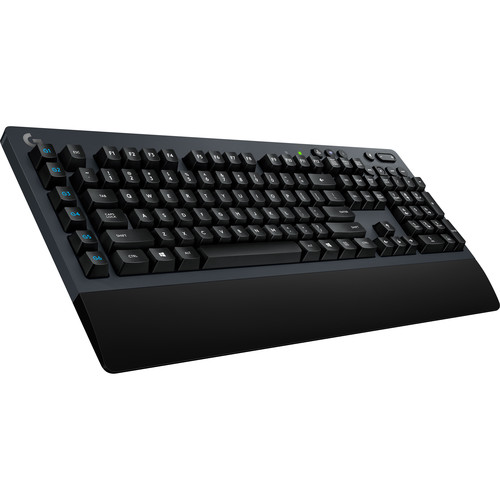 LIGHTSPEED wireless technology is Logitech's end-to-end wireless solution, delivering a 1 ms report rate for a fast, responsive connection. You can also switch to Bluetooth wireless technology at a push of a button. There are dedicated media hotkeys as well as six dedicated macro keys, which you can customize with Logitech Gaming Software. The Logitech Romer-G mechanical switches feature a short-throw actuation at 1.5 mm and can survive up to 70 million clicks.

LIGHTSPEED Wireless Performance
LIGHTSPEED wireless technology is Logitech's end-to-end optimized wireless solution, delivering a 1 ms report rate for fast and responsive wireless connectivity. This professional-grade wireless solution is built into the G613 gaming keyboard to deliver exceptionally responsive and consistent performance.
ROMER-G Mechanical Switches
Romer-G mechanical switches deliver quiet, precise mechanical performance with the feel and durability with 70 million click-life. One of the choice of top esports professionals, Romer-G switches have a short-throw actuation at 1.5 mm which means it is 25% faster than the competition's standard mechanical switches. Romer-G is an optimal blend of speed, precision and quiet performance.
Programmable G-Keys
There are six dedicated G-keys can be programmed with custom macros and in-app commands. Execute complex actions, simply and quickly, with a keystroke. G-keys can be assigned per game or app profile for customization and convenience. Use Logitech Gaming Software to set up and manage profiles, commands, and more.
Connect to Multiple Devices
Connect to LIGHTSPEED wireless for fast 1 ms report rate or connect to other devices with the push of a button using Bluetooth connectivity. Switch between high-performance LIGHTSPEED wireless and Bluetooth anytime quickly and easily.
Battery Life
Using only two AA batteries, the G613 can be used for up to 18 months. When the battery life is at 15%, both the LED status indicator light on the keyboard and Logitech Gaming Software notifications will warn you before it runs out.
Bluetooth Requirements
For Bluetooth connectivity, please make sure the device is running Windows 8 or later, Mac OS X 10.12 or later, Chrome OS, Android 3.2 or later, or iOS 10 or later.
UPC: 097855135285

I purchased a g613 four years ago, it was perfect for what I needed. When it started to fail (double stroke keys) I was happy to find it available through b&h

This keyboard does not provide the click expected of a mechanical keyboard, but it does provide a good field for typing and its design somehow improves keystroke accuracy. Very pleased.

I've had other Logitech mechanical keyboards when they still used the Cherry switches. I've had Razer mechanical keyboards. They all had programmable keys along the left side, which can come in handy. The G613 has no apparent metal at all and a long wrist rest. Typing is easy although there is no clickety-clack sound; keypresses are pretty quiet, which may be more suitable for group areas. Wireless has caused no problems and there's now one less wire (I did put the USB receiver on the included cable so it is quite close to the keyboard). I might pay extra for a plank with an aluminum housing but none I looked at had macro keys. So I type happily with the G613!

Kids loved the Wireless connectivity, mechanical keys, palm rest, and latency. Works great in all games. It would have been awesome if it had RGB lights as well. Full-size keyboard and 18 months of battery life, what else do you want.

Good keyboard, the macro G keys helped my supervisor with simple tasks that he uses everyday.

I've been using this for work for a few months now and it's been working great. I set a programmable key for the calculator app which I use frequently. With use of 8 - 10 hours a day the batteries have not needed to be changed. The mechanical keys are much more accurate that the standard I've been used to using. Much easier to type on.

Is this keyboard OS X compatible?

Is this keyboard OS X compatible?
Asked by: Gfx
Yes, it is. It's compatible with Mac OS X 10.10 or later.
Answered by: jessica

can this keyboard work with 2 different ...

can this keyboard work with 2 different computers? one computer connected with usb and the other computer connected through bluetooth?
Asked by: am
Yes. According to the product description, &quot;Connect to LIGHTSPEED wireless for fast 1 ms report rate or connect to other devices with the push of a button using Bluetooth connectivity. Switch between high-performance LIGHTSPEED wireless and Bluetooth anytime quickly and easily.&quot;
Answered by: Gregorio M.

Does this keyboard work with logitech unifying ...

Does this keyboard work with logitech unifying USB receiver? I bought another logitech wireless keyboard but it doesn't work with the unifying receiver software.
Asked by: Benjamin
No, the wireless gaming devices all use LightSpeed and will only connect with the USB receiver it came with. However, this keyboard is Bluetooth enabled, without the dongle, so you could pair it to your computer that way.
Answered by: Logitech