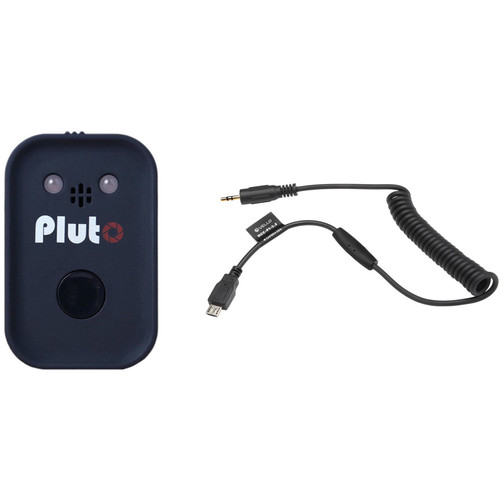 Make sure you have the tools to finally capture the image you have been dreaming of with the programmable Pluto Trigger, which is made available here as a B&H Kit that includes a Shutter Release Cable for Select Fujifilm Cameras. Able to be connected to a smartphone app, users will have excellent control over various intervalometer and triggering modes as well as the ability to set up sensors for more elaborate photography setups.

Take the guesswork out of triggering a camera with the features of the Pluto Trigger. It has the ability to function as either a simple infrared remote or it can connect to a smartphone over Bluetooth 4.0 LE for programming and setup of advanced modes. This provides users with a plethora of options and sensors to help them record time lapses, fast-moving subjects, and much more. The Pluto Trigger features multiple built-in sensors, including light, sound, and infrared, as well as an aux port for attaching other sensors. This can dramatically speed up response times to certain subjects, allowing the capture of balloons popping, lightning strikes, and more. This is augmented by the various intervalometer settings for creating specific shooting settings for your scene and the ability to use the sensors of your phone to access other, more unique triggering modes.

The Pluto Trigger features a standard 2.5mm camera connection that allows users to pick up different cables to work with their cameras. Also, this port can be used to connect a flash with the included PC sync cord. Alongside these ports is a micro-USB connection, which is how users can charge the built-in rechargeable lithium-ion battery, which can run for about 20 hours with normal usage.

This Vello 2.5mm Remote Shutter Release Cable is a coiled cable for connecting a Vello remote shutter release receiver or other remote receiver with a 2.5mm jack to select Fujifilm cameras.

Packaging Info
See any errors on this page? Let us know

i want to use it with a GFX50R this cable works? or wich cable works with my camera?
Asked by: Vladimir
No, you will need a sub mini cable, click the link below to view; https://bhpho.to/30r1ARz
Answered by: Rob

Will this work on Fujifilm X-T3?

Will this work on Fujifilm X-T3?
Asked by: Dave
This will work with an X-T3.
Answered by: Reuben

But which Pluto cable is included? I need the E3 cable for my Fuji XT-2. But Pluto makes other cables for other Fuji models. So which cable is in this box?
Asked by: Gary
By itself, the trigger comes with NO CABLE, that is why you are much better off getting the correct KIT for your camera. I would advise to also by an extra cable, it makes sense to have a spare. Goods luck with this, I love mine!
Answered by: JOE B.

Will this work on Fujifilm x-t20?
Asked by: Jan V.
Go to the Pluto Trigger website where they list all compatible camera models.
Answered by: Bill S.
Close
Close
Close