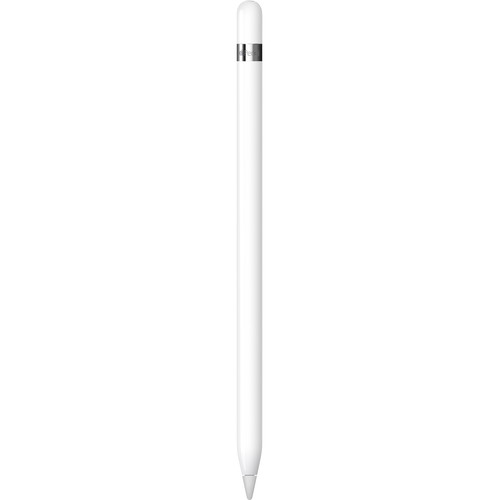 Key Features
Unleash your creativity with the 1st gen Apple Pencil. This stylus connects to your iPad Pro or 6th Gen iPad via Bluetooth, giving you the ability to draw, paint, write, and draft with single-pixel accuracy. When in use, the Pencil and iPad Pro work together to determine the Pencil's position on the screen, the force at which it's pressed into the display, and the angle at which it is held. This lets you alter the thickness and shading of the mark you're making in a fluid, natural manner.
More Details
In Stock
Share
Print
$89.99
Instant Savings $10.00
Configuration
Base ModelWith Case
800.606.6969

Unleash your creativity with the 1st gen Apple Pencil. This stylus connects to your iPad Pro or 6th Gen iPad via Bluetooth, giving you the ability to draw, paint, write, and draft with single-pixel accuracy. When in use, the Pencil and iPad Pro work together to determine the Pencil's position on the screen, the force at which it's pressed into the display, and the angle at which it is held. This lets you alter the thickness and shading of the mark you're making in a fluid, natural manner.

The Pencil can be used in a number of apps, including the Mail and Notes apps and a variety of third-party apps. It's designed for low latency and high precision, with the iPad Pro scanning its signal twice as often as when you use your finger. The iPad Pro can differentiate between fingers and Pencil, and both can be used simultaneously. The system also detects when you rest your hand on the display and ignores those inputs.

The battery lasts for up to 12 hours and is charged by removing the cap and inserting the Lightning connector into the Lightning port on your iPad Pro. A Pencil with a depleted battery can gain up to 30 minutes of usage time with a 15 second charge.

Excellent Apple Pencil thives me more flexibility and uses with my IPAD.

I'm an artist. First iPad and pencil. The pencil is easy to charge and use. Charging through the iPad takes for ever, so using the adapter it comes with an iPhone or iPad charger is great. The tips and adapter are small, so keep them in a dedicated bag, box, or you'll easily lose them. With more dense and fast drawing there is a 'lag' - you can read about it on many reviews. The pencil can't keep up with showing you what you drew. Can take 30 seconds for marks to appear. Annoying maybe if you want to see what you just did and carry on working, but I just adjust to that and wait as part of a new experience - less instant gratification! I love this 1st gen pencil anyway. Some drawings I've done with this pencil on a newer basic iPad- attached. No apps apart from what pencil opens in iPad.

Ordered the Apple pencil back in November. The iPad I have ordered from Apple was back ordered and not received until this week. Tried everything to get the Pencil to work but no luck even after charging it overnight and trying all the other tips out there. It connects for a second and that is it. When I connected it to my wife's iPad the same thing happened. Once it displayed that the Pencil is only 3% charged although it was plugged in overnight. This thing is defective.

Hello. I don't usually write reviews but I had to on this one because thes people are absolutely disgusting and nasty. I ordered a few things together and had a issue with it and tried to contact them and their useless. They aren't welling to give me my money back and not helping at all. They don't care about their customers or service or anything they only like to steal peoples money and then ignore them. I tried several times contacting them and all of then every single time was a time waste and did not help me get my refund. I honestly have no words left for this and please for all the customers thinking about buying from here. Please save your money and take your business somewhere else where they actually don't rob people of their money. This is absolutely disgusting.

Warranty on I pencil
Asked by: George G.
An Apple (1) year limited warranty is included with the Apple Pencil.
Answered by: Dana G.

Why will my Apple Pencil (get 1) not bluetooth ...

Why will my Apple Pencil (get 1) not bluetooth sync with my iPad mini (Gen 5). The iPad will do a bluetooth sync with other devices like my MacBook Pro. Nothing happens when the newly purchased pencil is plugged into the charging port?
Asked by: John
This Apple support post should be helpful: https://support.apple.com/en-us/HT205236
Answered by: Sagi

Is this compatible with the iPad Air 3?

Is this compatible with the iPad Air 3?
Asked by: Bradley
Once you have lightening charging port it will work. Ipad air 3 is compatible
Answered by: Phani

Does the Apple Pencil (1st Gen) work with the iPad mini 5th Gen?
Asked by: John
Yes it does, I&rsquo;m using the mini 5th gen with 1st gen pencil. The 2nd gen pencil does not.
Answered by: David

will this work with mini 2 and mini 5 ? thanks

will this work with mini 2 and mini 5 ? thanks
Asked by: Felisha
I am using the first gen pencil with mini 5, but I think the 5 is the first one that works with the pencil. It won&rsquo;t work with the 2nd gen pencil.
Answered by: David

show do you charge the pencil?

show do you charge the pencil?
Asked by: DJ James
Plug your Apple Pencil into the Lightning connector on your iPad. You can also charge with a USB Power Adapter by using the Apple Pencil Charging Adapter that came with your Apple Pencil.
Answered by: Daniel

Is this pencil the new generation 2 version
Asked by: Joseph J.
No, this is still the 1st gen apple pencil.
Answered by: James B.