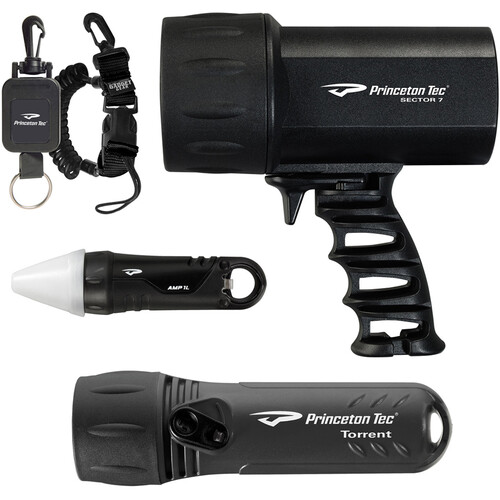 Special Order
Share
Print
Expected availability: 2-4 weeks
$199.99
$34/mo. suggested payments for 6 Mos.
with the credit card.§
or Save the Tax with the

Protect your Gear
Add a protection plan from $29.99
Color

The black NAV Pack LED Light Kit from Princeton Tec includes three different size lights: the Sector 7, the Torrent LED, and the Amp 1 as well as two gadgets, the Mini Retractor and the Coil Lanyard. All lights come in a black housing. The most powerful light in the pack is the Sector 7. This light has a gun configuration with a pistol grip and shines at 700 lumens. The Sector 7 is activated by a simple trigger switch which can be used with gloved hands. Momentary light can be accessed by pulling the trigger halfway and constant light when the trigger is pulled all the way. The trigger switch also features a lock to prevent accidental activation during transit or storage.

The second light included in the Nav Pack is the Torrent LED. This is a versatile and lightweight light which can be used as a backup light but is strong enough to be used as a main source light as well. The Torrent LED shines at 280 lumens and can be used in caves/caverns, or for restoring color which can be lost when reaching deep water levels, in addition to night diving. The Amp 1 is the smallest light in the pack and gives off a spot beam of 45 lumens. This light can be made into a marker light or provide area lighting by snapping on the included cone cover. It has a built-in large carabiner loop so that it can be attached to your pack or tent and provide hands-free light. The Amp 1 is waterproof to 330' and features a bottle opener for convenience.

The Nav Pack also comes with a Mini Retractor to secure your console or small lights and a Coil Lanyard to help you secure larger lights or heavier gear.