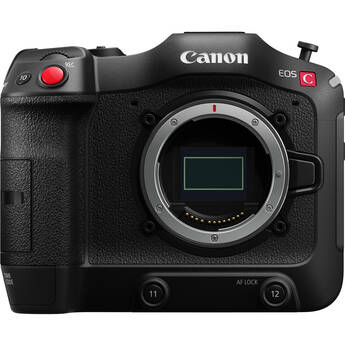 A movie camera is a professional video camera with a large image sensor capable of capturing footage that looks like it was shot on 35mm. Like DSLR and mirrorless digital cameras, they use interchangeable lens systems. However, dedicated cine cameras have more powerful image processors, record videos in codecs with higher bitrates, and have more robust sound-capture features. Leading brands of professional digital movie cameras include Arri, Red, and Blackmagic Design. DSLR manufacturers such as Sony and Canon also have excellent options, like the CineAlta and EOS cinema cameras.

Other Types of Cine Cameras

Although they're commonly associated with movie sets, TV studios also use mounted and handheld cine cameras for broadcast. Television studio and EFP cameras have CCU (camera control unit) inputs for triax and fiber cables. There are also compact cine cameras used for shooting live broadcasts at event venues. TV cameramen use these mountable professional POV cameras for sports broadcasts and livestreams intended to place viewers at the center of the action.

In addition to professional models, it is also possible to shoot cinematic video with high-end consumer and prosumer video cameras. To shoot an indie production on a tight budget, look for a Micro Four Thirds such as Blackmagic Design's Pocket Cinema Camera. Compared to high-end cine cameras, such affordable options have smaller sensors and higher video compression ratios.

How to Choose a Cinema Camera

Two key factors to consider are sensor size and resolution. While the reference sensor size for still cameras is the full-frame sensor, cine cameras use the Super 35 sensor as standard. It's about the same size as the APS-C sensor found in many DSLRs. When choosing lenses for a cinematic digital camera, be sure to find those that are larger or the same size as the sensor, to avoid blocking edges of shot frames.

The resolution of a cine camera sensor is also the highest video resolution it can produce. To future-proof your purchase, consider getting movie and broadcast video cameras capable of shooting 4K videos. Even if you only need 1080p footage, downscaling a 4K video produces better results than shooting with a camera that tops out at 1080p resolution.

Give your videos a cinematic look and improve your skills as a filmmaker by shooting with digital cine cameras. When you're ready to explore cinema cine gear, check out the large inventory of professional video equipment at B&H Photo and Video to find a varied selection of broadcast and movie cameras for all budgets.